This morning I had a few hours in the morning, so I loaded George into the mushroom-mobile (Memphis is recovering very well from surgery but it will be another couple weeks before she’s ready to romp in the woods) and headed to the Enchanted Mushroom Forest. I stopped at forest I know grows some good boletes – and I saw several in there – but they were mostly well past their best before date. Not to be deterred, I drove further up the road to another forest where I often find lobster mushrooms. I knew George would like this spot too because there is a great place to swim.

We were not 100 feet into the forest when I spotted a small chicken a few feet from this popular trail. How curious, I thought, finding a chicken the day after Jamie found one. In my neck of the woods, chickens are not that common.

I continued down the trail, looking for lobsters, but the only ones I saw were in poor condition. Not far along, I saw the most beautiful sight, about 20 or 30 feet in from the trail. Another chicken, and a beauty too! 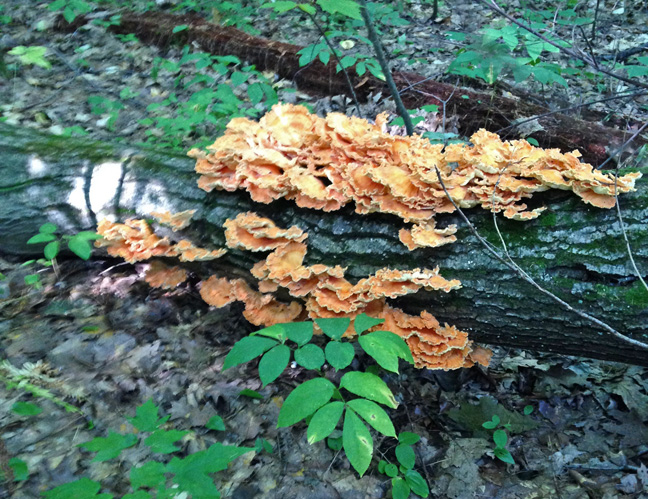 This chicken of the woods was young and fresh and perfect. I had one of those large re-usable grocery bags stuffed in my pocket, and I filled it up. That’s a lot of mushrooms. Chickens are choice edibles too.

I called up my brother the trout, Salvelinas Fontinalis and arranged to meet him for coffee on the way home. I gave him a big bag of mushrooms, and gave some to neighbours when I got home as well – and still, I have loads. One thing about chickens, when you find one you often find a huge amount.

Chicken of the woods are easy to identify and easy to see in the woods too, orange on top and yellow underneath. They really are a spectacular find.