We were honoured to have been invited by Toronto Pride Parade Grand Marshal Salah Bachir to march alongside his float in today’s Pride parade. 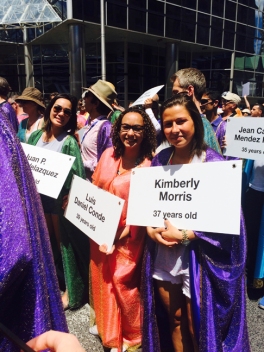 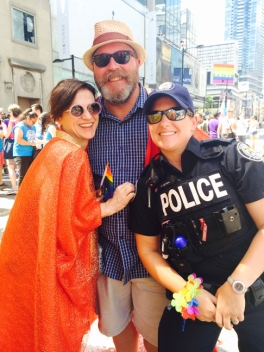 with Lori and a friendly policewoman

Me and Tuffy P 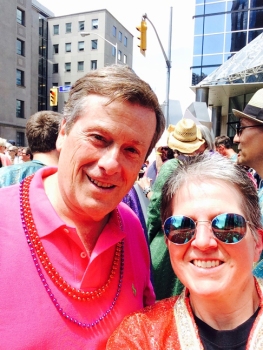 Tuffy P takes a selfie with the Mayor

The day was sunny and hot and the entire parade route was packed. What a great vibe along the parade route! Everybody was in great spirits, dancing and cheering and having a wonderful time. It was a fantastic expression of solidarity, freedom and equality.

We were near the front of the parade. At about 3:00, all the music was turned off and there was a moment of silence observed for the Orlando victims before we continued on. At some point after that our float stopped – near the end of the parade route – and we realized other floats were quite a way behind us. Apparently the Black Lives Matter people staged a sit-in or protest of some kind, stopping the parade for a while. It was difficult to know just what was going on as we were well in front of it. After that was resolved, the parade – and the party – continued.

This was the first time a sitting Prime Minister marched in the Pride parade. We caught a glimpse of Mr. Trudeau near the staging area at the start of the parade, but he was marching somewhere way behind us, so we didn’t see him during the parade. Premier Wynne was there as well, and so was Mayor Tory, who circulated around the staging area before the parade started saying hi to people in the parade and folks lining the streets as well.

Congratulations to Mathieu Chantelois, executive director of Pride Toronto, Grand Marshal Salah Bachir, and the fantastic people of Toronto for making this such a great event.