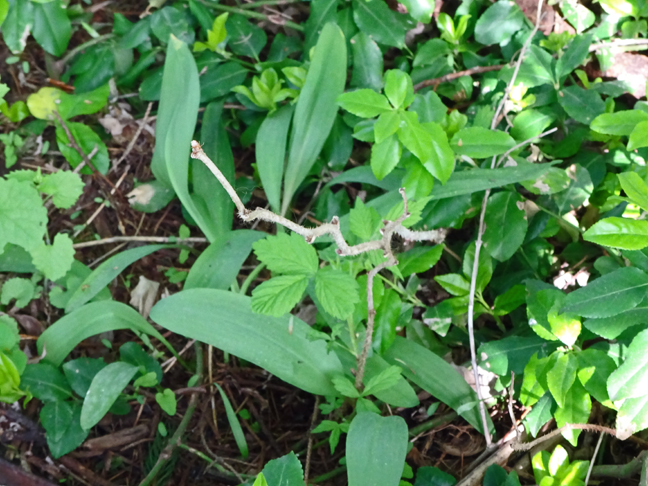 I hobbled out this morning to the forested bit we have in the back of our yard to see if my ramps survived. For those who are unfamiliar with ramps, they are Allium tricoccum. Ramps are a species of wild onion, sometimes called wild leeks. They are bulb-forming perennials, and they can be found in Southern Ontario forests. They are also delicious. In the photo, the ramps are the plants that look kind of like tulips. If you get a good look at the base of the step, they are reddish. These plants are easy to identify because they smell strongly of onion.

Ramps can disappear quickly in a forest if they are over-harvested, because they spread very slowly. When I find a large patch in a forest, I will take enough for a couple dinners and I leave the rest. That way, the ramps will persist and thrive for future years.

I know one forest which grew ramps in significant numbers. The edge of the same forest was also a great spot to find yellow morels. This forest is now surrounded by housing developments. There might still be ramps in there. Certainly people knew about the spot, as I’ve found broken old shovels back in there. I tried to get back in behind the construction last year to see if there were still morels but it was very difficult due to the construction. I expect that the best morel spots are now back yards of a block of houses. When it became clear the land around the forest was going to be developed, I removed a bag of ramps in soil and transplanted them into my little back forested bit, where I have just left them to slowly establish and spread. I guess this is their third season, and they have come up again. Perhaps they have spread a little. My brother suggested fertilizing them to encourage spreading, but because of my broken ankle, I haven’t been out doing any gardening this year at all – so far all I’ve managed to do was confirm they are still growing.