A bonus that comes with being a retired guy is that you can plan to go fishin’ during the week when most piscators are busy with the work-a-day world. Today I fished two rivers. This was not my intention. My intention was to catch plenty of trout at river numero uno and never contemplate bailing for another stream. 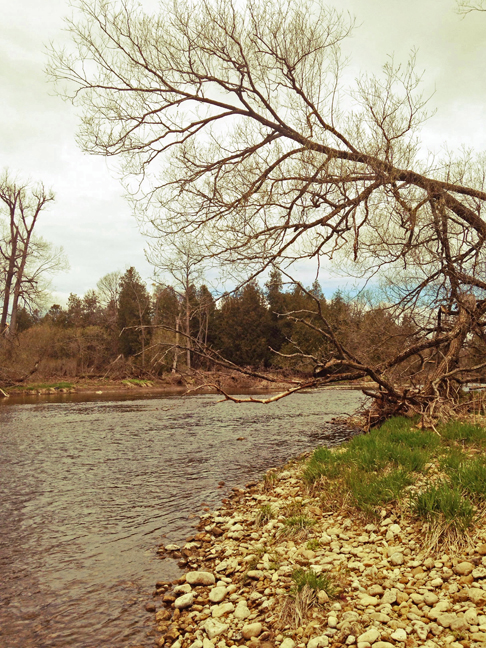 The first river is a well-known tailwater. For the non-fly fishers out there, this means this ought to be a warm-water stream with plenty of bass and pike an all that jazz, save for a bottom-release dam, which releases cold water from the bottom of the lake above into the stream, bringing the temperature down to trout range. Many years ago, some folks realized this and started stocking the stream with brown trout. Add some special regulations and you have a stream full of big honkin’ browns.

Although we’ve had some rain, the stream was low and clear. This isn’t always the case. There is a side-effect to this tailwater and that is a summer algae bloom, which causes the stream to get somewhat murky at times. For that reason some of my friends and I started referring to this river as The Muckhole, many years ago. During times of really bad algae bloom, we sometimes add a nasty adjective.

However, as I said, today it was low and clear and inviting. Unfortunately, there was no sign that trout lived there. I saw a few blue-winged olives (little olive coloured mayflies) in the air but no risers, so I worked a number of nymph and streamer patterns but all I had to show for my efforts was one sad chub. Now I know when I’m beat (and when I’m hungry) so I walked back to the car, took off my wading gear and headed to town for some lunch.

After lunch, I abandoned ship on the tailwater and headed over to another stream I’ve fished for many years, which I often think of as simply The River. I parked at a bridge, a popular access, yet I was the only car there. The water looked good. From the bridge I could see a large trout nymphing in the deep run on the upstream side. I suited up and headed upstream.

I wasn’t in the river 5 minutes when the Hendrickson emergence started. Lots of bugs coming off the water. For the non-fly fishers out there,  Hendrickson is the common name of a species of mayfly which emerges in the spring. Suffice it to say these bugs are basically trout ice cream. What happens is this. The bugs live as creepy-crawly nymphs underwater until the appointed emergence time. Then each day for as long as the “hatch” lasts, they emerge to the surface every afternoon (except when they don’t). When they get there, the ones that aren’t gobbled up by trout on the way up shuck their skin, revealing a set of sail-boat like wings. Then the adult Hendrickson takes flight, offering the swallows a dinner opportunity along the way.

The trout were interested in gobbling the bugs at that second when the nymph transforms into the adult or dun mayfly. There were quite a few trout rising including some big ones, many in difficult spots, tucked in near logs or sheltered by overhanging trees. Before the emergence stopped (about 3 hours after it began) I caught and released a couple good trout and hooked and lost a very large one, a trout in the category “alligator”.

It was great to get out on a river again after an entire season with no fly fishing (after breaking my ankle last year, wading was out of the question last season). Experiencing a splendid Hendrickson emergence made for an excellent afternoon. When these bugs come off the water, the stream comes alive and even some of the larger trout come out of their bomb-shelters to gorge on the mayflies. On many days this stream does not give up trout very readily, and days like this remind me there are many good trout in the river.