Each year we make up a batch of paska, or Easter bread. Tuffy P’s mom was from the Ukraine and she used to bake paska each year in coffee cans – that’s  the tradition we’ve continued. Paska is a delicious, light egg bread usually made with lots of lemon or orange zest, and sometimes with a few raisins.

We forego the raisins and also the typical decorations – braids and a sun. We focus more on making tasty paska and less on the frills. Serious paska bakers would also bring their symbolic bread to the church to get blessed.  When I was growing up, my mom, who was born in Poland, used to make babka, rather than paska, which was more of a cake than a bread.

For me, making Easter bread is less a celebration of faith than it is a nod to the beginning of spring. We usually make several loaves of paska and always give away a few. There is also the matter of the paska wars, a friendly baking competition with friends. 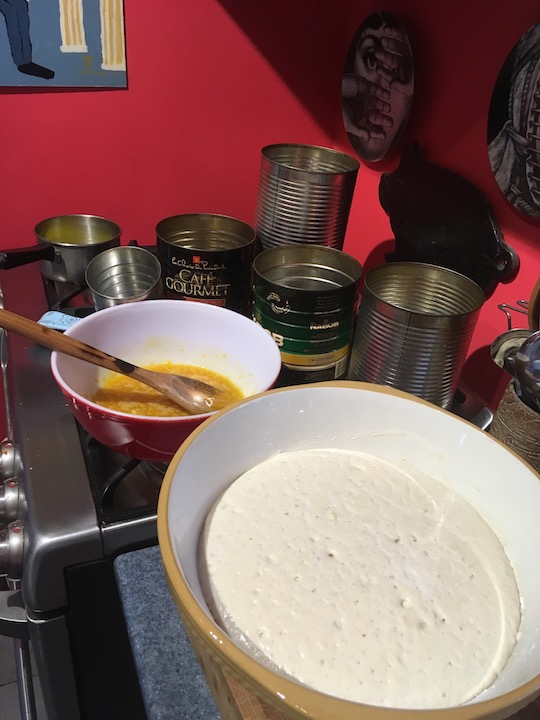 I made 4 loaves today, of different sizes. Tomorrow I’ll make a second batch.

Before placing the dough into the coffee can, we grease the can and coat it with breadcrumbs. This little trick allows the baked loaf to easily slide out of the can.

There are many recipes for paska. Everybody seems to do it a little differently. I’ve more or less settled on a method over the years. I proof some yeast first, then make a sponge before creating the final dough and letting it rise. I use lots of zest. “How much zest did you mom use?” I asked Tuffy P. “Truckloads,” was the answer. I’m using all purpose rather than bread flour. I let the dough rise until it more or less doubles, then punch it down and cut it into pieces for the cans. I proof the dough a second time in the cans then bake at a fairly low temp, initially 350F and after about 20 minutes 325F until the bread is done.