Yesterday afternoon, after I voted in our ill-fated Ontario provincial election, Bill picked me up and we headed for the Grand River for an evening of fly fishing. Bill is new to the fly fishing game, so we did some casting practice close to home the other day to give him a fighting chance at avoiding disaster. While he has plenty of work to do developing some good casting form, Bill did well, and as a special bonus, caught some trout.

It was a beautiful afternoon. There was a goose with babies hanging out nearby, and we saw an osprey looking for dinner. 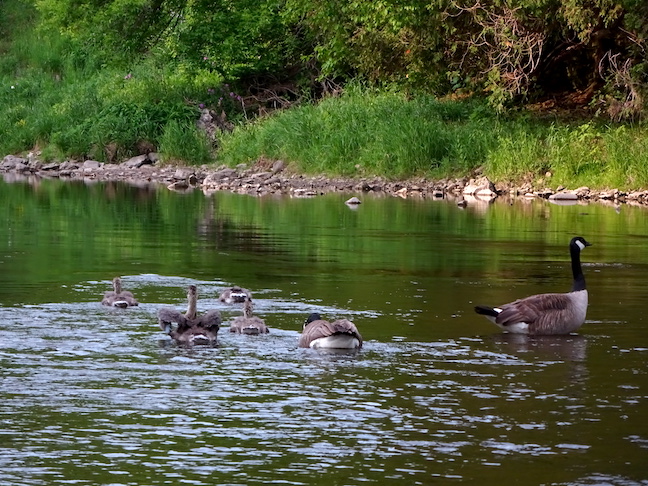 We were on the water by about 3:30 PM, at a spot on the middle river, not far from town. Insects were already emerging. Throughout the afternoon, there were some tan caddis, plenty of craneflies and a smattering of big mayflies, which I think are the ones we call grey foxes. The trout, often very selective in this tailwater, appeared to be enjoying the smorgasbord.

We caught brown trout, quite a few of them, although none of the “alligators” the Grand is known for. This kind of day, with lots of insects (but not the biting kind) and rising trout was a perfect intro to fly fishing for Bill.