I’ve found a couple more oil cans I like on ebay, so I guess I’m going to have to make a couple more banjos. It’s going to cost me more to ship these things to me than to pay for the cans themselves, but c’est la vie, eh. 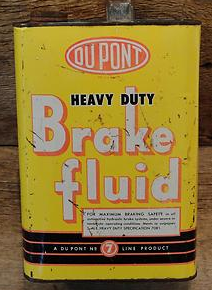 They’re both 1 gallon cans. The Dupont Brake Fluid can has a couple little rust holes in the bottom but I think I can work with that. It has a nice yellow colour with black stripes and it says heavy duty on it, which I think is important for a banjo, don’t you?

The Industrial can is a beauty. It even has a little janitor-logo-guy and the tag line WORKS FOR YOU. And as a bonus it says “The Mark of Quality”.

My plan for these is to make my own necks rather than using old banjo necks as I did with the first one. These are going to be fretless necks with wood violin pegs. I’ve got a pretty good idea how to go about this – there are a few decisions I have to make along the way, including the shape of the head and the angle of the head. As well, I haven’t decided if I’m going to make one piece necks or laminate on a separate fingerboard. It’s going to take me a while to get to it, as I need a few tools and I have to set up a reasonable workspace. All in good time. Rome wasn’t built in a day.

These two banjos will mark a second stage for me in learning this craft. I’ll still be using a ready-made pot but I’ll have to deal with the challenges of fashioning a neck. Meanwhile, I continue to practice playing all I can, even at the expense of practicing accordion. I’m fairly confident in my skills on the button accordion, although when I’m not playing regularly, tunes I’ve learned tend to drift away from my memory. I know they’ll come back quickly though, when I refocus there. For now, because there is so much new for me involved, I need to really focus on building some banjo chops. There are a number of songs I’m playing now, but with each of them I need to bring them up a notch or two and commit them to my memory.  As I do this, I’m thinking of documenting those tunes in little videos, similar to the one I did for Shady Grove.