After university (I graduated in 83), I started making paintings in a shared studio behind a convenience store in The Junction, way back before The Junction was a cool-hipster-artsy area. That was a good place to start out, but I wanted to find a place  where I could both live and paint. I found a storefront space on Ossington Ave (way before Ossington Ave became a cool-hipster-restaurant area) and fashioned it into two studios with a shared kitchen in the middle.

I had a work-space at the front, with a partial divider behind which was my bed and living space. There was a door to the kitchen and then on the other side a door to the studio in the back. We also had a basement, and that’s where the bathroom was along with the shower (let’s not talk about the rat problem) and some painting storage. It was perfect at the time.

I held my first two exhibitions in my work-space there at 70 Ossington. The place had previously been a hardware store, so the walls in the work-space were peg-board, and for month long periods I turned that front space into a modest and funky little gallery. 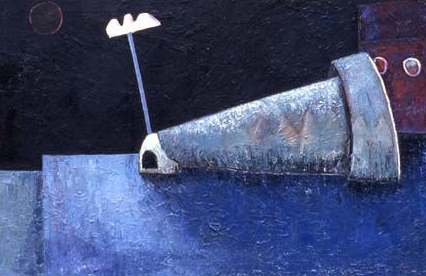 It was a pretty big painting – it must have been 7 or 8 feet wide. Unfortunately it no longer exists. I couldn’t sell the thing, and a friend offered to store it behind a business owned by some relative. Years later, he called me to collect the painting as it could no longer be stored there, but the painting was badly damaged. I don’t know what happened. I’m sure part of the problem was that I had hardly any coin when I made the painting and I used the cheapest oil paint I could get my hands on. Perhaps that, coupled with the storage conditions combined to seal the fate of this painting. When I retrieved it, paint was badly peeling off the canvas in layers. There was no way to save it.

Fortunately I had a picture.