This morning, before the full force of today’s heat and humidity set in, I went for a walk in a local Toronto woods. After all the rain we’ve been having lately, there were many mushrooms in the forest, some I was familiar with, others not. 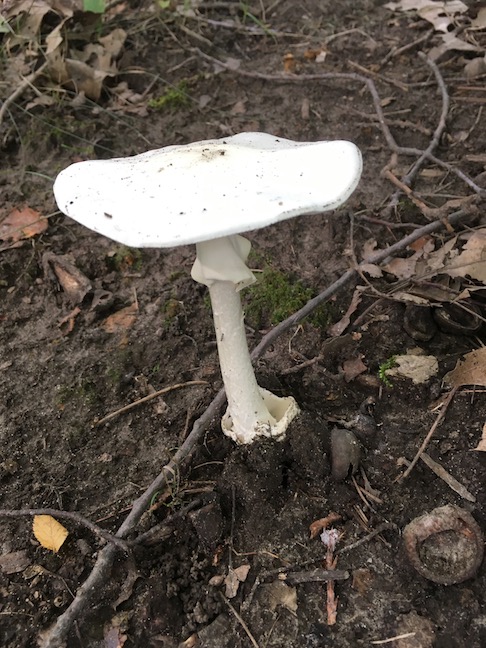 There were quite a few mushrooms in the Amanita group in the woods. These mushrooms start in the form of an egg. As they grow, the egg breaks, leaving a ring and a volva wrapping around the base of the mushrooms. This group of mushrooms contain some of the deadliest mushrooms around, including the scarily named Destroying Angels – white gilled mushrooms with a ring, a volva and white “free” gills, which are not attached to the stalk. Although there are some edible Amanitas, I avoid the whole group, just to err on the side of safety.

This has been a banner season for giant puffballs, Calvatia gigantea. These are excellent edibles when immature, as long as the flesh is white. Discard once the flesh turns yellow then brown. I must have spotted 15 of these in various sizes this morning. I brought some smaller ones home for dinner, and left the others either to spore out or for others to enjoy.

Turkey tail mushrooms, Tremetes versicolor. Many people believe a chemical in these mushrooms, Polysaccharide-K is beneficial in cancer treatment, although I have read that clinical trials have been inconclusive. I came across two logs today with turkey tail.

When I started learning about mushrooms, I understood that slime molds (or moulds) were fungi. I’ve read though that they are no longer considers part of that “kingdom”. However you want to group them, they’re plenty strange and interesting and this morning I saw this yellow-orange variety in a number of areas of the woods.